Our 19,000+ members come from Louisiana and Southern Texas. We represent workers in grocery stores, meatpacking houses, barber shops, warehouses and zoos. Formed during the Golden Age of Capitalism, we have bargained strong contracts that have given our members better wages, benefits, and working conditions for over 60 years. We set the standard so that all workers can get the recognition and compensation they deserve. 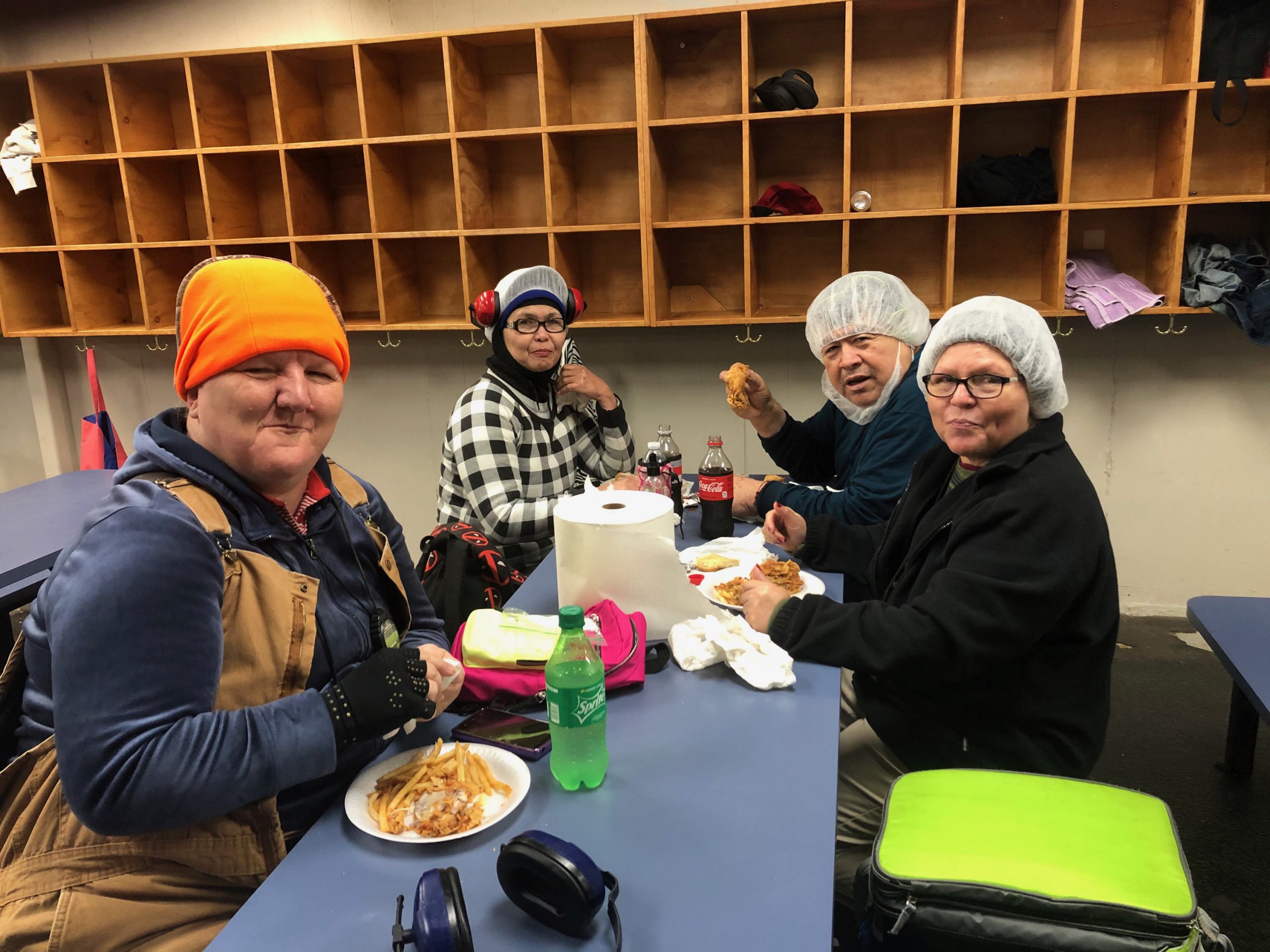 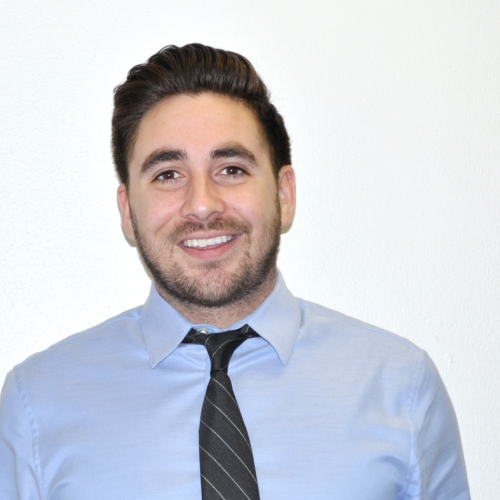 In 2014 he moved back to Houston and assisted former Secretary Treasurer, Rick Alleman, in the bargaining department and assisted former Grievance Director, Sue Mann, in the grievance department. Brandon has served with the former administration and assisted in all major negotiations for the last ten years and has served on the South-Central Health and Welfare Fund as a Trustee since 2013. He also graduated from the Harvard Trade Union Program in 2015 and successfully completed the Wharton Schools Executive Education Program on negotiations in 2016. Brandon was promoted to Director of Collective Bargaining and Special Assistant to the President in 2018. Upon Bill’s retirement Brandon was elected President of UFCW Local 455 by the Executive Board on April 24, 2020 after fulfilling the 30-day rule per the constitution.

“Since 1956, this union has had a solid history of protecting the interest of our members through collective bargaining, organizing and by actively supporting legislation that benefits all working people.

Our goal is to ensure our members continue to receive the best possible contracts which guarantee wage increases, health insurance, pensions, as well as safe and respectable workplace conditions. The success of this Local achieving these goals however, depends exclusively on the participation and support from which our members provide.”

Shirley has been a union member for over 35 years. Her father worked with Ingall’s Shipbuilders and was a strong union member - He taught her the value of a union. She began her career with UFCW Local 210 in Baton Rouge, LA in 1986 as the office manager. After the merger of Local 210 and Local 455 in July 1999, Shirley continued working in the Baton Rouge office. In 2001 Shirley left the office for a job as a Union Representative and enjoyed it immensely! It was then when she truly realized the joy of helping others.

In November 2017, Shirley was promoted to Field Director, overseeing all the Louisiana Union Representatives. Today, she serves as UFCW Local 455’s first female Secretary-Treasurer and has been filling this roll since July 2018. It’s been a long 35 years but she hopes to continue in serving the membership and staff she enjoys so much!

“UFCW Local 455 is all about making sure our members are taken care of. That’s why I’ve been with the union for over 35 years!”

“The history of a union is that of its members’ ongoing struggle for equality, fairness and social justice. For 60+ years we have provided a powerful voice for working people in Louisiana and southern Texas and we have improved the standard of living of our members and all working people in our communities.

Join us as we stand together as one great union and together, we will continue to accomplish great things.”

On July 30, 1956 a charter was issued by the Retail Clerks International Association, AFL-CIO to Retail Clerks Union Local Number 455, Houston, TX. The Charter was granted upon application for a charter by seven clerks employed by Henke & Pillot Grocery Stores (now Kroger) in Houston, TX. These seven founding members of Local 455 together with assistance from the International Union organized the clerks at Henke & Pillot and won an election for Union representation conducted by the National Labor Relations Board later in 1956. 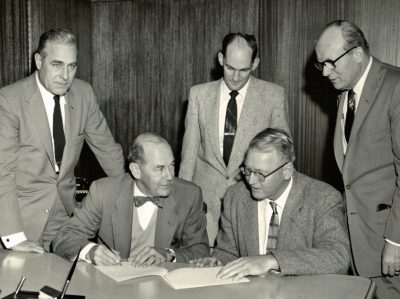 The first Union contract was signed on January 24, 1957 between Local 455 and the Henke & Pillot Division of the Kroger Company. That first contract was fifteen (15) pages long and formed the base upon which our contracts for food stores are built today. In 1957, pay rates were higher for male clerks than for female clerks.  The top pay for a two year experienced male clerk was $1.42 ½ per hour and females at $1.32 ½ per hour. The basic workweek for overtime was forty-two and one-half hours per week, there were five paid holidays and a maximum of two weeks paid vacation to full-time only.

In 1979 a new Union was born by the merger of the Retail Clerks and Meat Cutters International Unions. The name of your Local was changed to United Food & Commercial Workers Union Local 455 and even more strength was added on a local level by opening up lines of greater communication with the Local Unions that represent the meat employees in the stores. The Barber and Cosmetology International Union also joined with the UFCW in 1981. 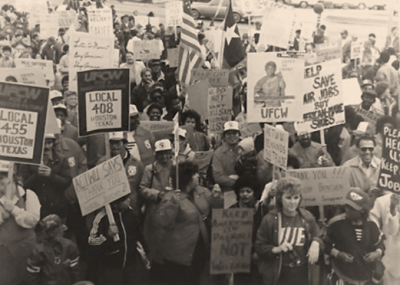 With the merger of Local 455 and Louisiana Local 210 in July, 1999, the combined memberships marked the beginning of a new era of cooperation, progress and innovation. In March 2008, Local 455 again, became even stronger with the merge of Local 408. Today your local union represents not only Retail Clerks; it also represents Barber/Cosmetologists, Meat Cutters, Poultry & Fish Processors, Food Service Workers, Manufacturing Operators, Truck Drivers and Distribution Center Clerks. The objectives and principles of Local 455 today remain as high as they did sixty years ago. They are set forth in the Constitution of your International Union and the Bylaws of your Local Union.

“The objectives and principles of Local 455 remain as high as they did sixty years ago.“

From these modest beginnings, your Local Union has moved forward year after year in improving wages, working conditions and benefits. We are proud to say our members, both past and present, have on more than one occasion stood up to be counted on when it has been necessary to preserve what we have and to achieve more for the future. We must be prepared to fight to keep what we have gained over these past six decades. From the founding seven to the over 19,000 members represented today, your Local Union salutes you for a job well done!

By growing our membership, we can continue to build union strength in our communities and win better contracts for all. Through organizing non-union companies, we can help bring wages, benefits and working conditions up to satisfactory levels which in turn will improve the lives of our members and also that of our communities. 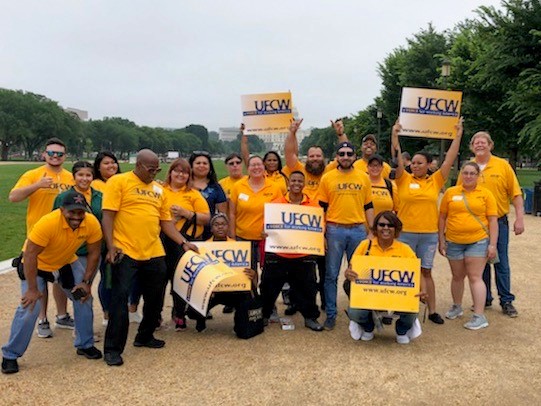 With a Union Contract standing behind them, Union workers can only receive discipline for ‘just cause.’

When you’re a member of a union, your contract protects you when you need leave or time off.

Transparency in a union contract can prevent discrimination in raises and promotions; and help to ensure union workers have protections that go beyond what is contained in the law.

94% of union workers have access to high-quality workplace healthcare that includes everything from regular preventative services to a crisis that you can’t control.

UFCW has been at the forefront of the pandemic making sure employers and elected leaders do the right thing to keep our members, workers and communities healthy and safe.

Members of UFCW Local 455 are empowered through the combined strength of more than 1.3 million fellow members which make up the United Food and Commercial Workers International Union. Together, with over 1,000 UFCW locals across the United States and Canada, we are an effective force for better wages, secure benefits and stronger rights at the workplace.

Have a question and not sure who to ask?
-Fill out the form below or send us an email at membership@ufcw455.org

Did you move?
-Fill out our change of information form.

Are you a Non-Union worker?
Our Organizers will answer your questions about joining the Union – Contact us here.

If you are unable to call during regular business hours, please feel free to contact us by completing the form below.

Join 1.3 million workers who are proud to be UFCW members! JOIN NOW